Arca Noae has comment on their website that this is a common issue running ArcaOS (OS/2) on modern hardware. [1]. It says "Generally, this is due to an incompatibility in the BIOS of the system with the DOS VDM code in ArcaOS (inherited from IBM’s OS/2 Warp 4)."

This is a problem found on a Thinkpad L420. DOS and Win-OS2 works fine in fullscreen, Win-OS2 also works fine on window mode, but DOS on window mode shows wrong/group/superimposed characters on the command line. 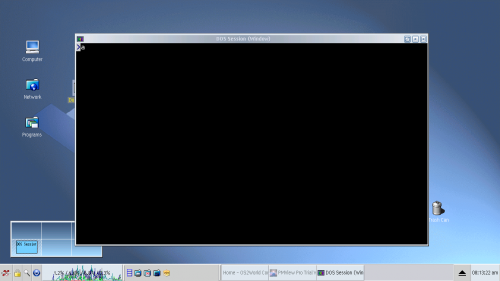 Commands on the DOS will work, like for example "exit" will close the window, but the characters just don't look right.

It was suggested to use:

But on this case /int10textgrfxsafe does not solve the problem.

That is a good trick that worked on the Thinkpad L420.

Patch
There is an experimental patch on which Arca Noae had been working - vio-1.0.wpi. You can find it on Arca Noae Ticket system. Ticket 1193

After starting a full-screen DOS session, a screen with "C:\" appears. After pressing any key, the screen closes and the popuplog.os2 is formed.

Reported on a Motherboard Asrock B85. BIOS UEFI and compatible.