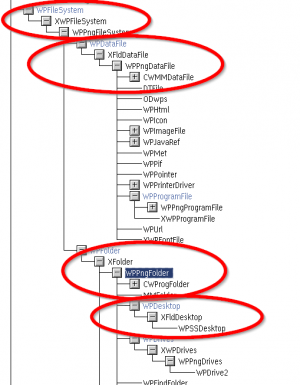 The Awesome thing is that this is complete transparent for the user. The system may have 4 different WPDesktop children and it works without the users to know about it. You may disagree with me and say this it is exactly what WPS should do, you can have a lot of children of different classes to enhance them, but as a consolidated OS it should try to reduce the complexity and not split the full functionality of an object in different classes.

The problem begin from the development side if you want to extend WPS objects, it starts to look bad. Also as a whole OS, ArcaOS should try to integrate the WPS classes to reduce the complexity for a developer that want to extend any of this objects.

In general terms idea can be interesting to consolidate the goal of xWorkplace to be a complete/extendable enhancement of the WPS desktop, but the downside will be that there will no feature improvement from the user perspective.

An Extreme Future for XWorkplace

This may be a crazy idea for today, XWorkplace is known as a Worplace Shell enhancement and it depends on IBM's WPS Classes. What if the XWP classes can grow to a level of replacing completely the functionality of its direct parent and start taking over it's original WPS Class?

It can be interesting to see the evolution of XWorkplace (if we can find resources to support this) as the thing that will eventually replace IBM WPS, and running in parallel with it in the same SOM implementation.

So you will have a SOM hierarchical classes structure like:

With that proposed scheme a future OS/2 desktop shell can be run with XWorkplace classes and objects, IBM's WPS Classes will be installed but no objects will be registered with those, and any application that still requires some IBM's WPS class to run will able to also run.